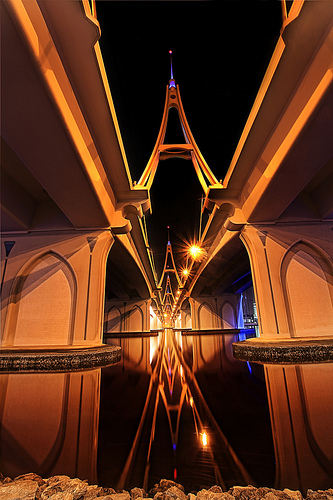 The Roads and Transport Authority (RTA) has awarded a contract for improving Al Awir Road and entrances to the International City (First Stage) Project, at a cost of Dh191 million.

Mattar Al Tayer, Director-General and Chairman of the Board of Executive Directors of RTA said, "This project is undertaken in collaboration with Nakheel Company, the main developer of International City. This project comes in light of findings in the ‘Traffic Impacts Study of International City and the Dragon Mart area’, especially after the opening of the Dragon Mart extension and the anticipated traffic backups in the area."

Currently, there is a single main entrance shared by residents of International City and visitors of Dragon Mart, which often results in backups during peak times. RTA has provided an additional signalized entry/exit point at Al Manama Road that has eased the traffic flow at the main entrance off Al Awir Road.

The project comprises improving Al Awir Road in a sector extending from the intersection of Sheikh Mohammed bin Zayed Road up to the roundabout of International City.A two-lane flyover will be constructed at the juncture of Nouakchott and Al Awir Roads to ensure the free movement of vehicles for inbound traffic from Nouakchott Road and outbound to westward Al Awir Road (in the direction of Dubai city). It will also provide a turning point for motorists coming from Al Awir Road heading to Sheikh Mohammed bin Zayed Road. The project additionally includes the construction of a service road in both directions of Al Awir Road to ensure the smooth movement of traffic running separately from International City, Dragon Mart and Al Warqaa District.

"The project work will include construction of a pedestrian and cycling bridge to ease movement between Al Warqaa and International City, and offer access to the business district, such as Dragon Mart and Fruits and Vegetables Market. The existing four main roundabouts in International City (Street 414) would be transformed into signalized junctions, and the existing lane would be widened by adding one or two lanes in certain sectors," explained Al Tayer.

The project also encompasses the widening of Nouakchott Road in both directions from one to two lanes, including modifications of junctions along Nouakchott Road.

A signalised junction would be added to provide a perfect access to International City, besides transforming the existing Treatment Plant roundabout into a junction, including providing a turn into the treatment plant.